Faculty News: A Glimpse of Their Work Outside of Class

Julio Bermudez, ordinary professor, was interviewed on Connecticut Public Radio’s Colin McEnroe Show “Architecture vs. Humans. Why do architects sometimes design buildings that make people feel bad?” He discussed the relationship between architectural design and spirituality. The Templeton Religion Trust is featuring Prof. Bermudez’s ongoing neuroscience research on its website. Prof. Bermudez presented “Neuroscience & Spirituality of the Architectural Transcendent: Measuring the Immeasurable” at the AIA-DC Architecture Everywhere lecture series and co-directed the first of three Critical Conversation Seminars sponsored by the Center of Theological Inquiry and the Architecture, Culture, and Spirituality Forum. 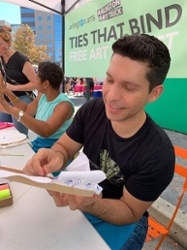 Crough Facilities Manager Lorenzo Cardim DeAlmeida has a public art textile mural, "Ties that Bind," on permanent display in the new Lubber Run Community Center in Arlington, Va. The hand-sewn monumental map was created by sewing all of the civic associations together to showcase the many different kinds of buttons on the map, each representing a person and illustrating the diversity of Arlington. The map was initially displayed at the Bozman Government Center in 2019. 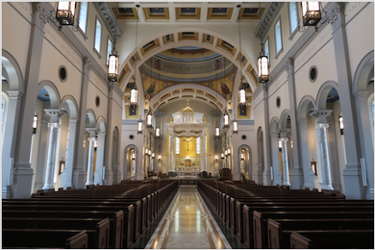 ames McCrery, associate professor, was awarded the Institutional Palladio Award for New Design and Construction under 30,000 square feet for the design of the Cathedral of the Most Sacred Heart of Jesus in Knoxville, Tenn.

Robin Z. Puttock, associate dean for undergraduate studies, contributed two chapters, Programming for WELL Certification on a University Campus and Empathetic Programming to Foster Inclusion, in the book Programming for Health and Wellbeing in Architecture. 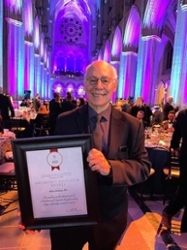 Milton Shinberg, part-time professor, was awarded the Washington Architectural Foundation’s AIA Architect Educator Award at the Fall 2021 Design Fete for his 43 years of service with The Catholic University of America.